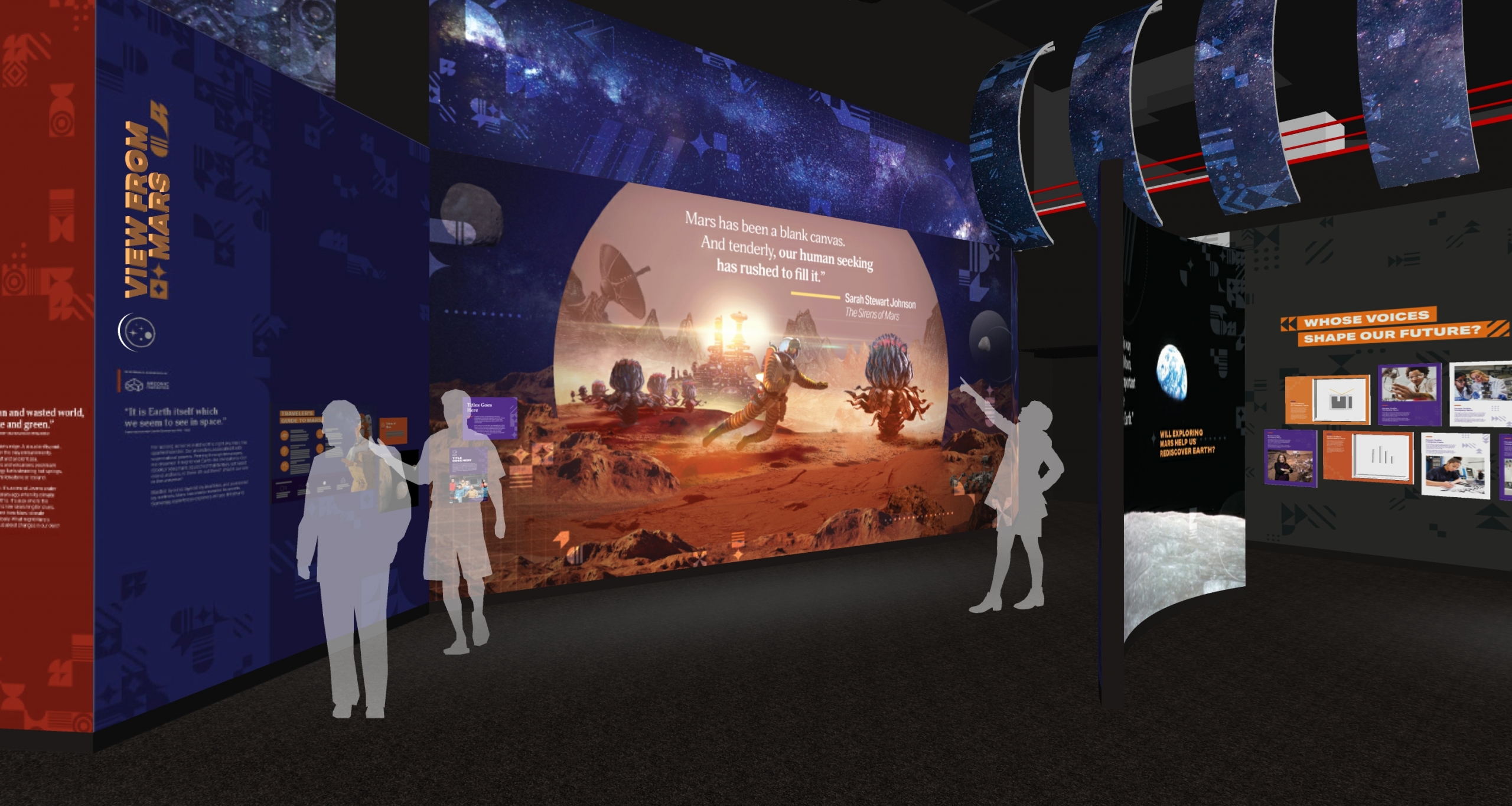 This article was originally published in the Latrobe Bulletin.

On Thursday, Nov. 17, Carnegie Science Center will unveil to members of the news media Mars: The Next Giant Leap, the most ambitious new experience built since the museum’s inception in 1991. The exhibition opens to Carnegie Museum members Friday, Nov. 18, and the public grand opening is Saturday, Nov. 19.

Mars is a permanent exhibition gallery and is included with general admission to the Science Center. With lead support by Howmet Aerospace Foundation and the PNC Foundation, the 7,400-square-foot exhibition explores how the issues of sustainability, climate change, social justice, and equitable access to resources can shape humanity’s future on Mars and on Earth.

Guests can envision and vote on what to include in a settlement on Mars and uncover the impact the Pittsburgh region has on the space ecosystem.

“The goal of Mars: The Next Giant Leap is to appeal to broad audiences and spark dialogue well beyond their visit, whether it leads them to think about space exploration, important social issues, or STEM careers they can pursue,” said Jason Brown, Henry Buhl Jr. director of Carnegie Science Center. “This exhibition is truly unique from any other exhibition as it provides engaging and unexpected perspectives on space exploration while at the same time illuminating why it is important to our everyday lives here on Earth.”

The concept of Mars grew from input the Science Center solicited from local community members from the North Side area, including high-school students, and professionals in the space industry to ensure relevancy and excitement for all. Based on survey feedback, exhibit design firm Luci Creative and the Science Center’s Museum Experiences team created seven experiential zones: View from Mars, Climatology, Martian Garden, Martian Living, Dream Big: Space, Pittsburgh in Mars, and Search for Life.

“This exhibit will not be cut and dry historical facts about Mars,” said Marcus Harshaw, senior director of museum experiences. “Visitors will operate remote-controlled Martian rovers to track down water sources, collectively vote on the direction of an imagined Martian settlement, and discover how to adjust popular food recipes on Earth to make comparable meals on Mars. Mars: The Next Giant Leap is future-oriented and highlights the impact local space research companies have on plans to inhabit Mars.”

The seven zones will demonstrate different elements of inhabiting and maintaining a habitable climate on Mars. Guests will experience the following:

Learn how our understanding of Mars has solidified over time through historic visions of Mars in View from Mars.

Uncover how climates produce the conditions for life to arise or perish through scenarios set to affect both Mars and Earth in Climatology.

Discover potential methods of growing food on Mars and how we might use these same methods to feed ourselves, ethically and sustainably, on Earth in Martian Garden.

Imagine what daily life on Mars might be like by exploring the living space of a future Martian resident in Martian Living.

Learn about the formative space exploration ecosystem in Pittsburgh, how Pittsburgh companies are contributing to future research, and about local space career opportunities in Pittsburgh in Mars.

Control Martian rovers, similar to ones on Mars’ surface, today, to seek out various signs of life and water in Search for Life.

Mars: The Next Giant Leap, a $4.48 million project, will complement Buhl Planetarium and the Science Center’s vast array of STEM programming that targets career readiness. All these pathways, programs and exhibitions will allow new audiences of young people to see themselves as activists, artists, makers, inventors, healers and thoughtful connectors in the science, technology, engineering and mathematics fields.

With the professional services of Luci Creative, Ravenswood Studio Inc., and lead support by Howmet Aerospace Foundation and The PNC Foundation, Mars: The Next Giant Leap is free with general admission.