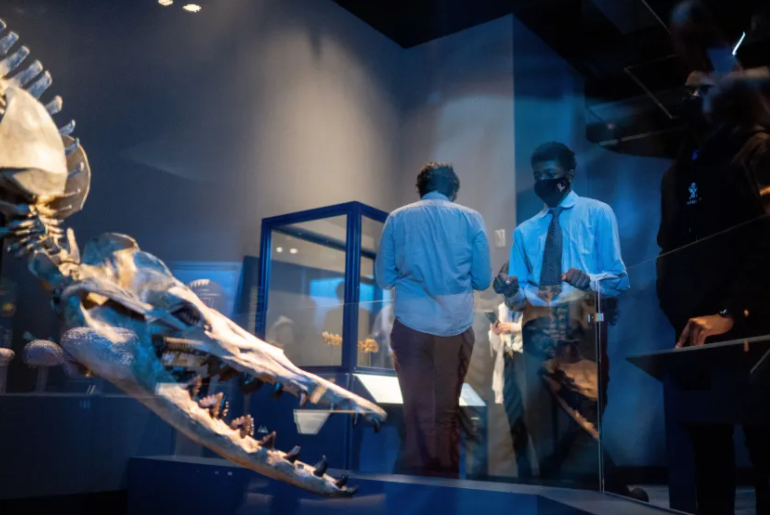 A St. Francis de Sales High School teacher on Tuesday encouraged her students to gather around a big glass box displaying a more than 100 million-year-old fossil near the entrance of a new exhibit at the Field Museum.

She asked if they noticed how the fossil almost looked like it was imprinted on a canvas as she pointed her finger at the ridges outlining a prehistoric marine creature.

Uriel Bahena, a freshman studying fossilization in his earth science class at St. Francis de Sales, was beyond fascinated.

“You get to see a firsthand experience [of] it — not just through textbooks and passages — you actually get to [have] hands on … it,” Bahena, 15, said after exploring the 7,500-square-foot exhibit. “So it was very interesting to see how it actually works.”

Bahena was among the first wave of guests who got an exclusive sneak peek of the Field Museum’s newest exhibit called “Jurassic Oceans: Monsters of the Deep.”

The immersive exhibit, which aims to bring to life the unvisited yet intriguing depths of the Jurassic seas, features more than 100 fossils and models of marine creatures dating back over 200 million years and will open to the general public Friday.

The exhibit will allow visitors to take a deep dive into prehistoric waters and learn more about the animals that were lurking in the oceans while dinosaurs roamed the land. And its lighting effects, backdrops and projections of computer-generated imagery of creatures swimming around enhance the “underwater” experience for guests.

On Tuesday, dozens of teenagers involved with the Big Shoulders Fund, My Block My Hood My City and the Duke of Edinburgh Award International made their way through the exhibit.

The long-necked plesiosaur — which is 33 feet long — and a 16-foot-long spear-toothed whale, also known as a Durodon, were two structures that wowed the students.

“It’s really exciting to see the size of some of these things,” explained Marie Georg, a senior exhibition developer at the Field Museum. “So maybe you’ve heard of them because you’ve seen a picture in a book … but to see these enormous fossils [in real life] shows you how big they really were.”

And while many museum exhibits prohibit guests from touching the displays, this one actually encourages people to feel certain aspects – much to the pleasure of guests passing through Tuesday.

One display showed the different brain sizes of three creatures. A student, grasping the largest one, joked to his teacher that it reminded him of his smart classmate.

Other hands-on experiences throughout the exhibit included opportunities for visitors to touch real fossils of shelled creatures from the Mesozoic Era and feel the textures of replicated sea creature skins.

“My favorite part was the fossils and the way you could feel their skin to give you more of an idea of how they were,” Bahena said. “And it gives you overall more of an image you can [put with] these creatures.”

Many of the models and fossils also display a “fierce factor,” a ranking of the animal’s ferociousness based on factors such as its teeth, diets and overall toughness. Some were surprised to learn that the Leedsichthys, one of the largest fish known to have ever existed, was low on the “fierce” totem pole. Sharks were also not the top predators of the Jurassic oceans.

Bahena said the exhibit, on the museum’s main floor, gave him a new appreciation for science and the ocean.

“The way it all builds is more than I would have thought and known about,” he said. “So it gives me more enjoyment to like life, to see more and discover it.”

The exhibit was produced and curated by London’s Natural History Museum. The Field Museum is the display’s first stop on its U.S. tour and will remain on-site through Sept. 5. before it moves to its next destination, which wasn’t immediately known.

“We are thrilled to be working with the Field Museum for the launch of our exhibition ‘Jurassic Oceans: Monsters of the Deep,’ which features some of the most striking specimens from our collections,” Doug Gurr, director of the Natural History Museum in London, said in a statement. “In the present day when our planet is in crisis, it is more critical than ever before for us to act as advocates for the natural world. We hope visitors will enjoy diving deep into the history of our fascinating oceans and will be inspired to protect their future.”