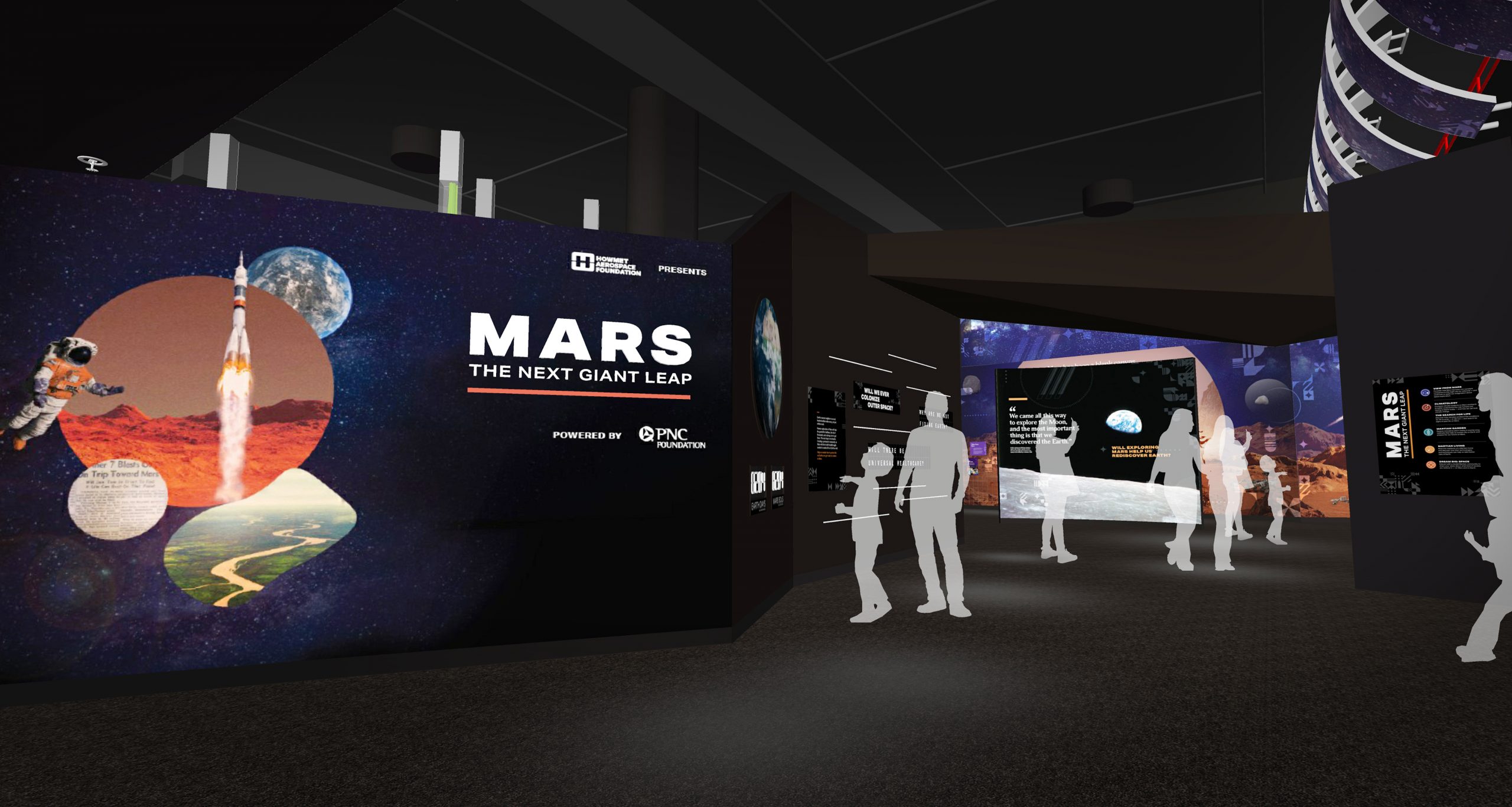 Carnegie Science Center’s newest exhibition will help visitors envision life on Mars and understand how the journey there will go through western Pennsylvania.

This article was originally published on CarnegieMuseums.org by Jennifer Davis. Ravenswood Studio is the proud fabrication partner for this exhibit in partnership with designer Luci Creative, Media Developer RLMG, and AV Integrator Electrosonic.

Astronaut Michael Collins famously articulated his belief that if the world’s leaders could see our planet from 100,000 miles out, their perspective would fundamentally change.

Collins may have been alluding to political divisions, but the fragility he referenced is becoming ever more apparent amid Earth’s changing climate.

Exploring the universe is about far more than mapping the galaxy and racing to see who can reach new destinations first; it offers lessons for how humans live and thrive on Earth. Prior space travel has yielded tools that enhance our everyday life, including phones, GPS navigation systems, and satellite technologies—space innovations that are now woven into the fabric of our lives.

“Our modern day is completely fused with space,” says Justine Kasznica, who chairs the Keystone Space Collaborative, an effort to develop the commercial space industry in Ohio, West Virginia, and Pennsylvania.

Kasznica sees massive potential for life-changing discoveries beyond our own atmosphere, and Pittsburgh is fast becoming an important hub for those efforts.

Researchers at Pittsburgh’s McGowan Institute for Regenerative Medicine are looking at the benefits of zero-gravity environments in biomanufacturing. North Side-based Astrobotic Technology is developing a lunar lander capable of taking commercial payloads to the moon’s surface.

“The goal is not to answer all the questions, but to get visitors to ask a lot of questions.”

Meanwhile, Carnegie Science Center is reaching beyond the moon to Mars, bringing the red planet to Pittsburgh with a new permanent exhibition opening in November.

From making life more convenient to extending our long-term survival on this planet, there’s much to be learned in the pursuit of space exploration.

“We want people to be inspired and excited about the next generation of space exploration, whatever that may look like,” says Jason Brown, the Henry Buhl, Jr., director of the Science Center, and vice president of Carnegie Museums of Pittsburgh. “It doesn’t make the news when a rocket takes off anymore, but space really is the final frontier. Nobody should see it as ho-hum.”

Piggybacking on a recent and massive renovation of Buhl Planetarium, Science Center staff wanted to provide additional content to help guests explore space, crossing over from the digital experience in the planetarium to a more physical learning encounter

The exhibition taking shape, called Mars: The Next Giant Leap, will “transport” visitors to a settlement on the red planet, providing a glimpse into how future residents might live and the challenges they’d face in that waterless and inhospitable world.

Entering through a pitch-black tunnel signifying their landing, visitors will traverse a Martian garden where settlers grow their food. They’ll get a look at the homesteaders’ common area with their personal effects. They’ll also have a chance to use remote-controlled rovers to search the terrain for evidence of water, as well as ponder questions that will shape the way the settlement grows and evolves.

“We didn’t want 101-level space content,” says Marcus A. Harshaw, senior director of museum experiences for the Science Center. “We wanted to tell a story with meat on the bone and some weightiness.”

Replacing the roboworld® exhibition in one of the Science Center’s largest permanent galleries, Mars: The Next Giant Leap will usher in a new era of more immersive and “democratic” exhibits designed to engage people of all ages.

Brown describes it as moving away from a top-down format in which the Science Center’s experts choose all content in favor of bringing relevant science to a broader audience of teens and adults through an inclusive design process.

To figure out what would be relatable and meaningful, the Science Center conducted surveys, brainstormed with high school students from Pittsburgh Public Schools, and had conversations with North Side community groups to see what they found intriguing about space.

“We didn’t want 101-level space content. We wanted to tell a story with meat on the bone and some weightiness.”

Marcus A. Harshaw, Senior Director of Museum Experiences for the Science Center

It turns out most people are fascinated by Mars. But kids will be kids. Harshaw notes that the surveys yielded some facetious questions—“Will there be standardized tests on Mars?”

“They said, ‘We hate tests!’” he says. “But they also got deep and asked things like, ‘Will Black lives matter more on Mars than here?’ and ‘How does health care work on Mars?’”

Harshaw adds that some North Side residents questioned why they should take an interest in roaming the galaxy when there are problems to solve in their own backyard. It’s difficult to care about other planets, for instance, while living in a food desert.

Greening Up the Red Planet

Those anticipating a ruddy, barren landscape within Mars: The Next Giant Leap will instead find a lush abundance of life. For a settlement on Mars to be sustainable, the people living there would need to grow their own food. Floor-to-ceiling sprouting stations will illustrate how Martian settlers could grow crops using less water, fertilizer, and resources than we’re used to in Earth-based agriculture.

Those methods can be employed here at home as well, helping to address the needs of communities where fresh produce is a scarcity, according to Carla Littleton, animal and habitats manager for the Science Center.

Littleton said their team is selecting hardy crops such as alpine strawberries, which are known for enduring in environments with cold temperatures and high ultraviolet light levels.

“We want to look for things that  will survive outside of perfect growing conditions—things that can grow in more hostile environments, whether naturally or through breeding and genetic engineering,” Littleton explains.

Littleton and their team also are looking for utilitarian plants that serve multiple purposes. Plants that are both edible and provide beautiful flowers, medicinal plants, and vegetation that can be used as building materials as well as sustenance would be ideal additions to the Martian garden.

Beyond the challenges of farming without soil and with limited water, Littleton notes that the absence of pollinators and decomposers would pose additional hurdles. Worms can’t survive in the dry environment of space. Could cockroaches assist in breaking waste down into compost instead? Honeybees would perish on the trip to Mars, but native bees that overwinter for six months could potentially lay dormant for the better part of the trek through space, Littleton says.

“We’re rethinking the limits of what we can do [on Mars], and all of those things circle back to how we can apply them here [on Earth].”

Carla Littleton, Animal and Habitats Manager for the Science Center

From urban agriculture to growing in areas plagued by drought, techniques for growing food in the smaller, more water-efficient, and higher-light environment of Mars could benefit earthlings as well.

“We’re rethinking the limits of what we can do, and all of those things circle back to how we can apply them here,” Littleton says.

From the physical challenges of building a settlement where there’s no atmosphere or water to more subjective uncertainties, such as how scarce resources should be divided and shared, the problematic aspects of sustaining life on Mars mirror many of the struggles we face here on Earth. And that’s exactly the point of Mars: The Next Giant Leap.

“Science has proven there was a seismic change of climate on Mars billions of years ago,” Harshaw says. “You can look at Earth and see a lot of parallels there. What is similar? What is different? And what does that mean for Mars and Earth in the future?”

Tackling issues such as conservation, equitable distribution of resources, hunger, and education, guests will make decisions to shape the future of the exhibition.

Visitors will vote on how residents of Mars should handle scenarios that directly impact life on the settlement. And, each quarter, the Science Center team will add new features to a miniature model settlement based on the tallied votes. So, the model will reflect visitors’ values.

About the size of a two-car garage and similar in style to the Science Center’s beloved Miniature Railroad & Village attraction, the “mini” Martian landscape will depict the settlement as it grows—from the bare essentials of basic living quarters to the facilities needed for growing food and creating water.

“Will we add schools or jails? Soccer fields or fences?” Brown asks. “It will be what our visitors choose it to be. I haven’t seen this anywhere in any museum—it’s co-creation.”

The exhibition yields a unique STEM education opportunity, too.

“The goal is not to answer all the questions, but to get visitors to ask a lot of questions,” he says. “STEM is about developing the tools to answer your own questions.”

A secondary goal is to pique interest in space careers and establish conduits to move interested students from the classroom to real jobs.

The Science Center and Keystone Space Collaborative are part of a triangulation of nonprofit, for-profit, and educational institutions working to nurture a fledgling space industry in western Pennsylvania and develop the workforce to staff it.

Around 550 businesses and institutions in the tri-state region are researching and developing space-related technology, according to the Keystone Space Collaborative. The Collaborative is leading a collective effort to secure the region’s place in one of the fastest growing and most recession-proof industries in the United States.

“The work we’ve done proves there is the beginning of a really strong community here,” the Collaborative’s Kasznica says.

By strengthening connections between research and development institutions and companies already involved in the space economy, and by creating a physical presence to represent the industry in Pittsburgh, members of the region’s space contingent want to forge a career-development pipeline that welcomes everyone.

“We want people to know you don’t have to be an astronaut or rocket scientist to be a part of the space economy,” Harshaw says.

“Accountants, writers, historians, HR personnel … there’s a role for you in the space industry and it’s not just in Cape Canaveral, Florida, or Houston. It’s everywhere, and there’s a large focus here in Pittsburgh.”