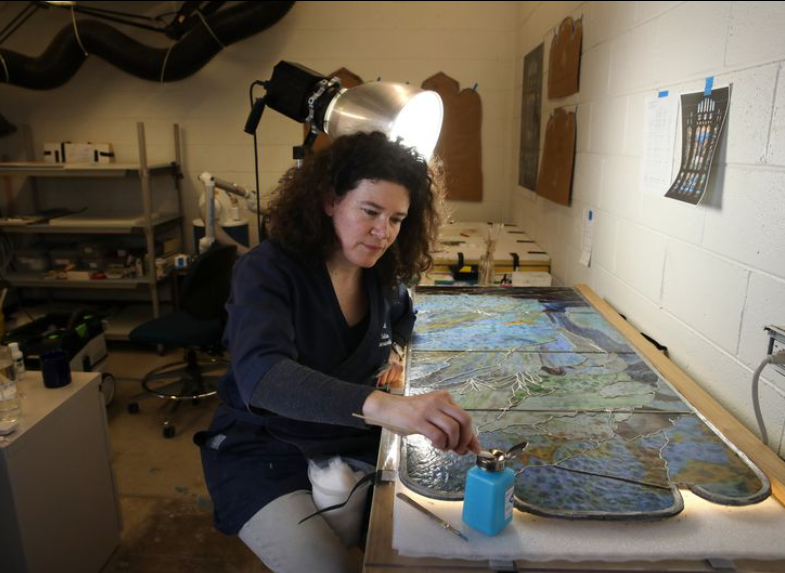 This article was originally published in the Chicago Tribune by Steve Johnson. Ravenswood Studio is providing fabrication support to the Art Institute of Chicago for this exhibit.

The Art Institute has acquired a huge Tiffany stained glass church window that it will display prominently and is predicting will become a “museum icon,” the Chicago museum announced Wednesday.

The 23-foot-high by 16-foot-wide composition, purchased in June 2018 from a church in Providence, R.I., depicts a nature scene in New Hampshire’s White Mountains in 48 layered-glass panels that represent a pinnacle of American work in the medium, according to museum experts.

When restoration is complete later this year, the encyclopedic museum plans to install the 1917 tableau atop its Grand Staircase by the Michigan Avenue entrance, backlit and framed, central amid significant Chicago architectural artifacts there.

“It’s going to be breathtaking,” said Elizabeth McGoey, associate curator of American decorative arts. “I remember standing on a scaffolding next to the window, one of those first weeks I was there” to see it in Providence. “I was so in awe of being able to have that proximity to the glass and to understand the scale. And I am so excited that with the installation we have planned, we’re actually going to be bringing that same experience to the public.”

Restoration has been going on since it arrived in Chicago in the summer of 2018. The process has involved cleaning the whole window and then removal and repairs of the glass on about one-third of the panels, along with less-intrusive fixes on another third of them, said Rachel Sabino, the objects conservator shepherding the restoration project.

“It’s really staggering, from a technical point of view, seeing a craftsperson push the absolute boundaries of a material and a technique,” Sabino said. “So that side of it appeals to me very much. But, I mean, the window itself is a thing of absolute beauty.”

Said to be in remarkably good shape for its age and its public placement, the window was designed by Agnes Northrop, the leading landscape designer for Tiffany Studios. Although commissioned for Providence’s Central Baptist Church, now the Christian, multi denominational Community Church of Providence, its spirituality is implied rather than overt: Known as the “Hartwell Memorial Window (Light in Heaven and Earth),” the window depicts a waterfall and pool surrounded by trees in the foreground with Mt. Chocorua, an oft-painted peak in the New Hampshire range, in the background.

Standing in the basement room where the restoration work was taking place, Sabino, McGoey and Sarah Kelly Oehler, the chair and curator of American art at the museum, agreed that bringing this work to the museum’s public is a “once-in-a-career” experience.

Museum officials did not reveal the purchase price but said that price alone was not what determined who would buy the work. Leaders of the Community Church, in deciding to sell it, wanted it to go to a museum and they wanted to know the museum’s plan for care and display of the window, said Oehler.

“I really credit the church with this foresight and thinking about their role as stewards for the window,” she said. “They have a very community focused mission, and they’re not a museum, and they’re not in the business of protecting works of art.”

In the news release announcing the acquisition, Pastor Evan Howard of the church said, “We are extremely pleased that this exceptional work of art has entered such a renowned collection.”

In picking AIC as “the ideal institution to care for and display the window,” Howard said the church hopes that it will be “experienced by a broad public audience that includes scholars, artists and visitors from around the world.”

The museum hopes to have the window in place and ready to show the public by the end of September, said Oehler.

Museum Director James Rondeau, in the statement, praised the Hartwell window as one demonstrating “the highest level of achievement in American glass production.” In its new home atop the staircase, he added, the window “undoubtedly has the power to become one of the museum’s icons.”