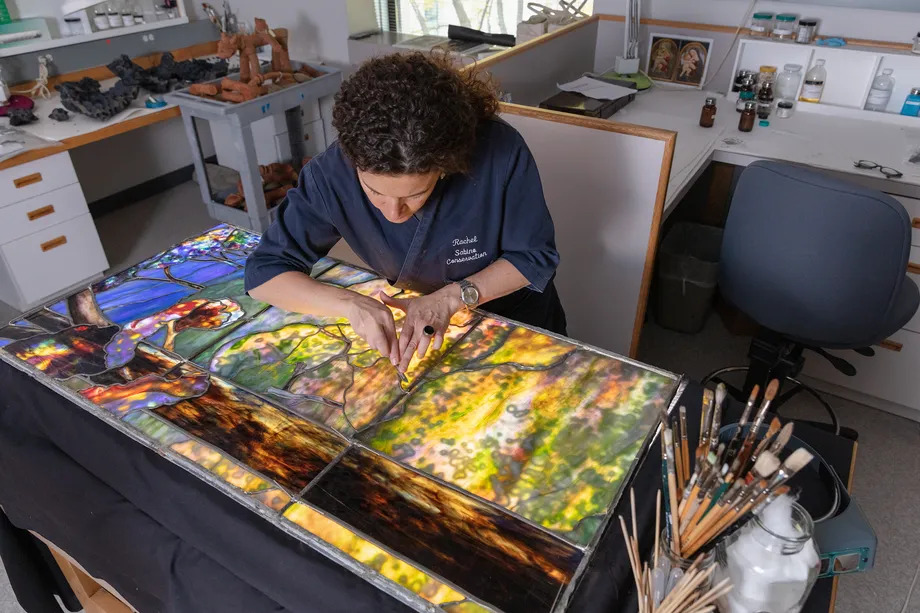 The Art Institute of Chicago already owned some major creations by the Tiffany Studios, but its holdings took a giant leap forward in 2018, when it acquired a dazzling 26-by-18-foot church window depicting Mount Chocorua in the White Mountains of New Hampshire.

The 1917 window will go on view May 27 in the Henry Crown Gallery at the top of the grand staircase in the museum’s Michigan Avenue building, an expansive second-floor space that houses an array of architectural fragments.

“There are any number of extraordinary Tiffany windows out there,” said Sarah Kelly Oehler, Field-McCormick Chair and Curator of American Art. “This absolutely has the scale and presence to match them all.”

No figure in the history of American decorative arts is better known or more revered than Louis Comfort Tiffany (1848-1933), who at his peak in the early 20th century oversaw a factory with more than 300 artisans.

Although his firm produced ceramics, jewelry, enamels and metalwork, Tiffany was best known for his ground-breaking stained glass, which he incorporated into lamps and the windows of religious, commercial and civic buildings across the country.

Several years ago, the Art Institute learned that the Community Church of Providence (Rhode Island), was interested in selling its expansive 48-panel window. The work was originally commissioned for what was then Central Baptist Church as a gift of Mary L. Hartwell in memory of her husband, Frederic W. Hartwell.

“This window was such an extraordinary opportunity that it was one that we really felt we couldn’t miss — to acquire something of such incredible magnitude that would both interest people in Tiffany overall and just give them a great object to look at,” Oehler said.

When many Tiffany windows are removed from their original locations, the sections are sold separately, but the Rhode Island church was intent on keeping its large-scale example intact, so its leadership reached out to the art-museum community.

“They really wanted to preserve what they thought was an incredible treasure, and they were very excited about working with a museum such as us to display it in its intact and monumental glory,” Oehler said.

Rachel Sabino, an objects conservator at the Art Institute, first examined the window on site in Feburary 2018 and then conducted a more in-depth examination after it arrived in Chicago. “The window was in phenomenal condition for how old it is,” she said.

Working with Diane Rousseau, a stained-glass conservator from Massachusetts, she cleaned the entire window, including removing putty that had sealed it into place at the church, and fixed some cracked glass panes.

Sabino made two surprising discoveries during the process — makeshift, last-minute repairs the original installers undertook to apparently fix broken sections of glass. In one case, a replacement pane was mounted using putty (not inset in lead as it would have been at the factory), and in another, the workers painted a piece a glass on site to make it blend in the surrounding imagery.

“Those are the sorts of evidence that we are thrilled to find,” Sabino said, “and would never, ever want to lose because it does offer us insight into the field-level decisions.”

The window will be mounted in the Henry Crown Gallery on a metal framework that was designed by Sabino and other museum staff in conjunction with Ravenswood Studio in Lincolnwood, which fabricated the structure.

It was conceived in such a way that the rear lighting can be serviced without disturbing the window and individual sections of glass can easily be removed as necessary for cleaning and conservation.

“The whole thing is a pretty remarkable feat of engineering, all of which was super collaborative,” Sabino said.

Tiffany Studios used an array of inventive techniques in its glass production, and this window features examples of many of them. One effect, for example, is what Oehler called “foliage glass,” in which the look of foliage was achieved by throwing shards of existing glass into hot liquid glass. “So, it looks like almost confetti in the glass, and it has this sort of crystalline structure you can perceive because the shards are still visible,” she said.

The window is attributed to Tiffany designer Agnes F. Lathrop. It is impossible to know for sure that she was responsible for it, because there are no design drawings in her hand and no extant archives from the Tiffany Studios, but all the evidence points in her direction.

“In this case, it was very evident that it would have been her,” Oehler said. “She was really the leading designer for nature and the natural landscape, so she specialized in flowers, flora and landscape views. She was the one who was doing this sort of work.”

Oehler sees the Tiffany acquisition as a worthy complement to the museum’s “America Windows,” the popular Marc Chagall stained-glass window that went on view in 1977.

“In many ways,” she said, “it will be a great experience for our visitors to go see both windows and understand different aspects of stained glass as an art form throughout the 20th century.”