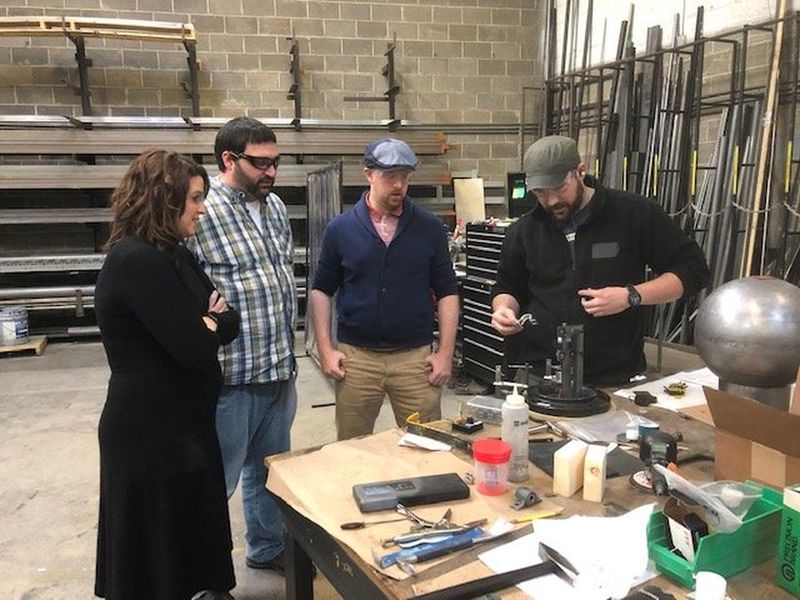 This post was originally featured on ChicagoTribune.com by Daniel I. Dorfman.

Tucked inside a building in an industrial-looking stretch of Central Park Avenue in Lincolnwood, two local businesses have forged a mutually beneficial partnership.

For most of the last decade, Luci Creative, a design firm about to celebrate its 10th anniversary in business, and Ravenswood Studio, a fabrication company, have worked together, often with the same clientele, including museums, corporations and other entities seeking a fresh look for their brand.

While they don’t share all of their clients, employees at Luci will often work with clients to translate their stories into designs, with employees at Ravenswood then engineering the concepts, and turning them into finished products.

The partnership is flourishing in an open workplace with few enclosed offices, where visitors are often be greeted by an employee’s dog.

Adjacent to the office space is a production facility where the screeches of welders can be heard and sparks from torches can be seen.

Ravenswood founder Michael Shapiro said he has operated the fabrication company for about 30 years, and started out small, working with television and theater.

Over the years his operation expanded into the production of scenery for operas and large theaters, as well as working with museums and experiential projects.

“It is highly custom…it is one of a kind fabrication,” Shapiro said.

Goehle, of Highland Park, who said she remembers being intrigued by design during her many childhood visits to Chicago’s Museum of Science and Industry, said Shapiro helped her and Snow launch the business after they saw an opportunity to create a new company focusing on storytelling and design.

“The process is always refining and developing, and we continue to work on that, which has allowed us to work on larger scale projects over time and continue to grow,” Goehle said.

“I think the beauty of the two companies working together is we know ideas can actually become a reality,” she added.

Ravenswood has 80 employees, including project managers, design detailers, a director of operations and a manager of shop operations, as well as carpenters, scenic artists and metalworkers employed in the production facility.

While it can take between 8 to 12 weeks to build an opera set, museum exhibitions may take several months, Shapiro said, adding that he enjoys the variety.

Some of the clients the Lincolnwood companies have worked with include:

With design being subjective and always changing, Goehle and Shapiro say they have to keep on top of the current trends.

“We’re not sitting behind a computer and Googling pictures of stuff and saying, ‘let’s make it like this.’ We are sending our people out into the world,” Goehle said.

While both companies declined to reveal their annual sales figures, Luci opened a new office in Boston two years ago, and Goehle said there might be other expansions in the future.

Still, the leaders at both companies remain cautious, and say they do not want to overwhelm their employees.

“We are a family-owned company and a family culture,” said Goehle, who is expecting her second child. “People have lives outside of the office.”

As the new decade begins, leaders at both companies say they are optimistic about the future.

“We’ve [Luci Creative] successfully completed over 50 projects to date,” Goehle said. “We are confident this partnership will continue to meet our clients’ needs.”