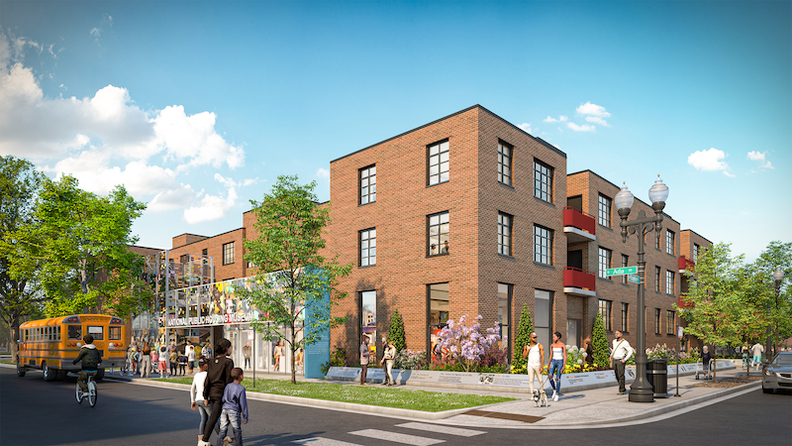 With three recent grants totaling $6.5 million in hand, the museum plans to start the conversion of a 1938 public housing building on Taylor Street.

This article was originally published in Chicago Crain’s Business Journal by Dennis Rodkin.

With three recent grants totaling $6.5 million, the National Public Housing Museum is ready to begin the conversion of a vacant former Chicago Housing Authority building into a museum and rental housing.

The project has been “a vision since 2002, when the buildings were coming down” at the Jane Addams Homes on Taylor Street and one was left standing for a future museum, said Lisa Yun Lee, the museum’s executive director.

“Public housing residents imagined there could be a museum for them to share their stories and challenge the mainstream narratives about what public housing was and who it was for,” Lee said.

Two decades later, Lee said, the group is set to schedule a groundbreaking and begin rehab of the 47,000-square-foot, three-story building, with a target completion date of late 2023. When done, the building will contain not only the museum and its recreated historical living spaces, but also 15 modern-day affordable rental apartments managed by Related Midwest, the developer of nearby housing.

Turning the remnant building into a museum, a roughly $14.5 million project, was formerly scheduled to begin in 2017 and be completed in 2018. In the interim, the not-for-profit organization has had offices in River North.

In July, city officials awarded the museum $4.5 million in Chicago Recovery Plan funds. Shortly before that, Lee said, the Chicago-based Builders Initiative made a $1 million donation to the museum, following a gift in the same amount earlier in the year by the Joseph & Bessie Feinberg Foundation, also a Chicago philanthropic group.

Designed by Landon Bone Baker, an architecture firm known for its attractive designs of affordable housing, the rehab will create three retail stores at ground level, three recreated apartments from different eras, and exhibit and office spaces. Completed in 1938, the building was originally one of 32 that together contained 987 units in one of Chicago’s first three public housing projects. Designed by several architects, they were named for Jane Addams, the Nobel Prize-winning social worker, who died three years before the development was finished.

With its history and namesake, the building makes an ideal place to memorialize the nation’s 20th-century public housing efforts, Lee said.

“Chicago has an extraordinary history of believing that the city should respond to its people,” she said, “but it’s also one of the most segregated cities in the United States. The relationship between our racialized history and where we decided to build public housing has broad ramifications.”

The rehab project includes bringing out of storage the Animal Court menagerie of sculpted bulls, bears, elephants and other creatures created by Chicago artist Edgar Miller. They’re seen in the historical photo below.

Ravenswood Studio is providing Exhibit Fabrication Services for this project in partnership with Amy Reichert Design.