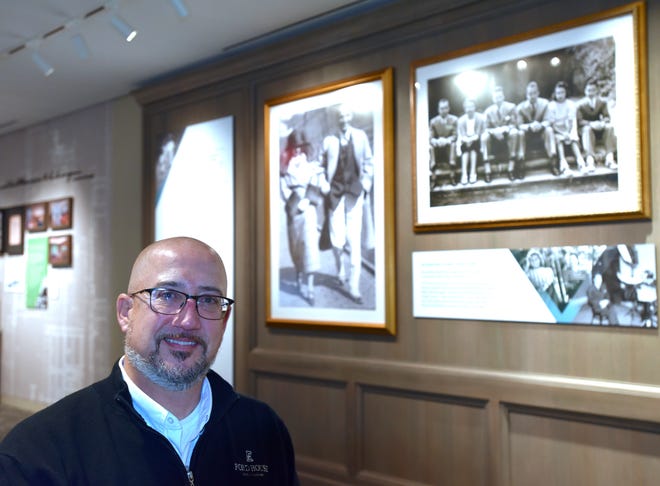 Step inside the new visitor center at Ford House, the home and estate of Henry Ford’s only child, Edsel, wife Eleanor and their four kids, and you won’t just learn about the prominent family’s story. You’ll see it.

The gorgeous 40,000-square-foot center, designed to look like a modern Cotswold cottage and overlooking Ford Cove on Lake St. Clair, features a new permanent exhibit that incorporates handwritten letters from Eleanor to the kids, photos, even family videos. Visitors will see the Fords swimming in their pool, ice skating on a frozen Lake St. Clair, boating and more.

Before the visitor center was built, videos had to be shown in an old coat room in the 1920s house because there wasn’t room to show them anywhere else.

“This is their story,” said Mark Heppner, president and CEO of Ford House. “We tried to let the stories, the films and the photos speak for themselves.”

The 40,000-square-foot visitor center and a new 17,000-square-foot administration building right next to it are the biggest additions to the 87-acre estate since the Albert Kahn-designed house was built in the late 1920s. Both will be open for tours during an open house that starts Wednesday and runs through May 30 (see box for more details).

And for the first time since January 2020, the house — it closed for restoration work even before COVID-19 hit — will be open for self-guided tours starting Wednesday.

Even for those who’d just like to have a meal at the new restaurant, the Continental (named after the iconic car that Edsel helped design inspired by a trip he and Eleanor took to Europe in 1938), with stunning views of Ford Cove, will be open Monday through Sunday — with dinner hours Thursday, Friday and Saturday.

And guests can see the permanent exhibit or duck into the new gift store without buying a ticket to see the main house. Grounds passes are required — a daily pass is $5 — to walk foot trails that wind around the estate and even on to nearby Bird Island.

“There’s no charge (for the exhibits or to visit the restaurant),” said Heppner. “We want everybody to have the opportunity to have a better understanding of the estate and the family and why it’s important.”

Construction started in 2017 on the new buildings, designed by SmithGroup, the latest in a series of updates to the estate. They were on track to be finished last spring when the pandemic hit, delaying the opening. They’re designed to mesh with the Fords’ Cotswold-style home, historically known as Gaulker Pointe, which was named a National Historic Landmark in 2016.

The new buildings take inspiration from various elements of the house, even some modern rooms done in the 1930s, and it’s all “incorporated in a more contemporary, multi-purpose, visitor-focused way,” said Heppner. “It’s beautiful.”

Heppner wouldn’t disclose how much the new buildings cost but said they were all funded by the estate. Eleanor Ford left an endowment to maintain her home when she died in 1976.

The 1,538-square-foot permanent exhibit, “Ford Family Story,” is one of the most unique aspects of the new visitor center.

Heppner said he didn’t just want to use technology for the sake of using technology, but it uniquely integrates photos, videos and more to share the family’s story.

“It’s really the subtle elements,” he said. “It’s an opportunity to bring our own collections out — artifacts, photos, films — and there’s a lot in the small stuff.”

The display is based on a 3D model created of the house, which was then turned into an animated projection by Luci Creative in Chicago that worked with Richard Lewis Media Group. Using a touchscreen, visitors can pick different scenes and family videos pop up.

“We have all these home videos and stories, so it’s a way to integrate all of that,” said Clare Pfeiffer, Ford House’s director of communications and engagement.

The Fords may have been one of the nation’s most prominent families but above all “this was truly a family home,” said Pfeiffer. “Their grandchildren say that. This was a home more than anything else.”

One of the rotating exhibits, “Driven by Design,” features three cars from the Ford House collection that have never been showcased together before — the world’s only 1939 Lincoln Continental prototype, the 1932 Ford Model 18 Speedster and a 1934 Ford Model 40 Special Speedster.

The display, which even features a rare recording of Edsel with his voice, puts Edsel’s impact into context and focuses on “his impact on design in the automotive industry,” said Heppner. “…It’s all about the evolution of him as a designer. We’re trying to have people look at cars a little differently. This just isn’t about a car that has a motor that gets you from Point A to B. Every detail of this is so thoughtful.”

“Driven by Design” will likely stay put for at least a year but change, possibly with a rotating national exhibit or something else.

“It gives us a lot of flexibility, which we never had before,” said Heppner.

In the end, it’s all about telling the Ford family’s story. In the past, Heppner said the only way for visitors to really learn about Edsel, Eleanor and their children was to take a guided tour with a docent through the house. That’s not the case anymore.

“Our goal is no matter why you come here is that you’re able to understand that the story and walk away with a consistent story… It’s great to have a story told in a thoughtful way,” Heppner said.